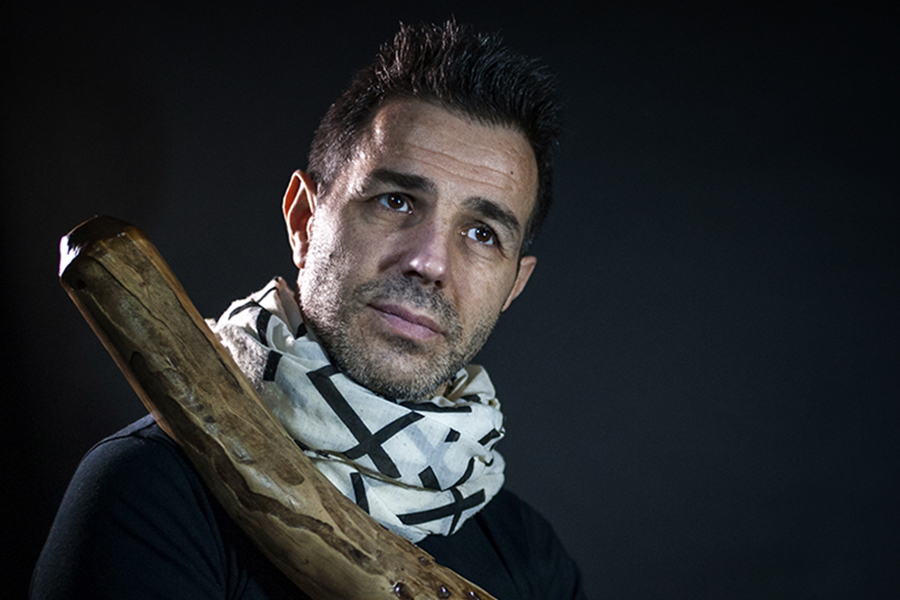 Raphaël Didjaman
Didgeridoo player
Workshop : Can music help us to go back in time?

First Saxophonist and Deejay at the age of 20, then Didgeridoo pioneer in France since 1995, date back from Australia, after a long time spent in the Out back, he becomes manufacturer-luthier and professional of Didgeridoo. He founded the label TRIBAL ZIK RECORDS in 2007, and defends the didgeridoo mixed with poetry and all types of music. Raphaël Didjaman has produced a discography of 10 albums to date, including a trilogy on the poet Arthur Rimbaud, with an eloquent list of actors and singers of the French scene. His collaborations with composers Bruno Coulais (Le peuple migrateur) and Philippe Sarde (Quai d'Orsay) will lead him to compose for the sake of music to the image and to become a solo didgeridoo player in the Divertimento Symphony Orchestra conducted by Zahia Zouani.

Since the dawn of time homo sapiens uses the voice as an instrument of expression and communication. Thanks to the mechanics of the breath, the sound is triggered mainly by the diaphragm that expels air from the lungs to vibrate the vocal cords. This use of the breath will also serve man to play musical instruments such as the Didgeridoo in Australia, by the Aboriginal peoples for more than 20 000 years. Today, this magnificent instrument has revealed to us virtues still unknown until now: the multiple cures of sleep apnea, relaxation and other addictions such as smoking cessation through the practice of play and surrender. in question. What is the history of this ancestral instrument? The current relationship between the didgeridoo and the aborigines today? The Western world's approach to this long-standing instrument?